You Are Here: Impacts of User Behavior in Energy Efficient Retrofitted Residential Buildings 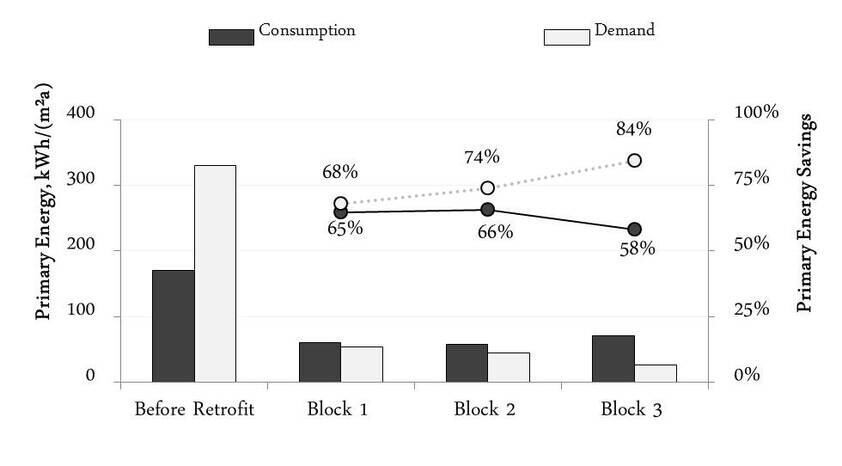 Specific primary energy consumption before and after (black) the refurbishment and calculated energy demand (grey), weather adjusted (Source: Own illustration)

After comprehensive thermal retrofits of residential buil­dings there is often a discrepancy between the actual hea­ting consumption and the theoretical, calculated consumpti­on (the ‘energy performance gap’ or ‘energy efficiency gap’). The aim of this research project is to identify and investigate the determinants that lie behind the actual, measured con­sumption, together with the economically optimal retrofit strategy for reducing the consumption of fossil fuels.

The project is based on three identical residential buildings from the 1950s, which were recently retrofitted. Each buil­ding consists of three buildings with 10 apartments. Using various combinations of retrofitting approaches, seven dif­ferent variations of retrofit were carried out and are availa­ble for analysis.

There is a range of factors that influence energy consumpti­on in buildings. Some of these are determined by the users, through their activities and behavior; others depend on ex­ternal influences such as climate and the technical configu­ration and functioning of the energy system. Comprehensi­ve measurement technology was placed in the apartments and used as a basis on which to begin evaluating these various influences, and this was supplemented by surveys of occupants.

An interdisciplinary research approach is being employed to answer the question why the actual consumption differs from the theoretical, calculated amount.

The Institute for Energy Efficient Buildings and Indoor Cli­mate (EBC) is a specialist in the technical evaluation of re­trofits and the Institute for Future Energy Consumer Needs and Behavior (FCN) has expertise in economic behavior research. These institutes are working together on the pro­ject as a team.

An analysis of the measurement data (see Figure 1) shows that the theoretical energy saving potential was not able to be fully realized as a result of the retrofits, an example of the so-called ‘energy savings deficit’ and ‘rebound effect’. A saving of 65% of primary energy consumption was expec­ted for the first building and up to 84% for the third, but the measurement data shows that this has not yet been realized. For block 3 a difference between actual and calcu­lated consumption of 26% is evident. The reasons for this discrepancy are partly due to technical problems (malfunc­tioning/maladjustment of heating system technology), and partly due to user behavior. The use of standard values in the method used to calculate theoretical consumption also leads to inaccuracies: these fail to take into account the range of preferences and behavioral attitudes of the occupants. The research will expand our knowledge and un­derstanding in this area and lead to an accurate calculation method for evaluating and predicting energy saving measu­res in the built environment.