You Are Here: Assessing the Economics of Microdrilling for Geothermal Exploration

Assessing the Economics of Microdrilling for Geothermal Exploration 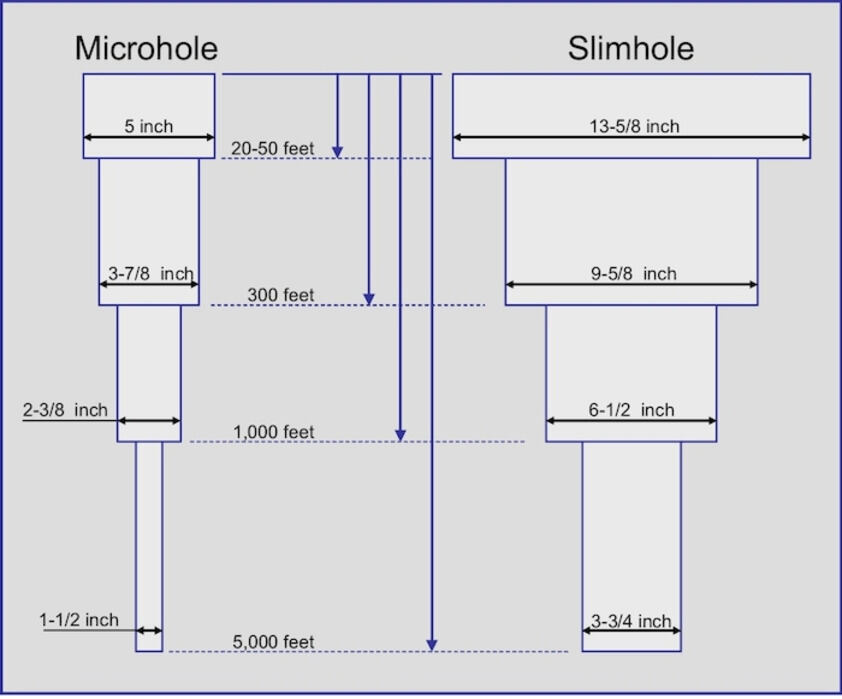 Drilling diameters by depth, exemplarily for 5000 feet microholes (as formerly planned by the U.S. DOE) and slim-holes (Source: Patton, 2007)

In this project we investigate the economics of microdrilling for large-scale deep geothermal systems, based on the microdrilling concept proposed by the Institute of Applied Geophysics and Geothermal Energy (GGE), E.ON Energy Research Center.

Before developing a geothermal energy resource, it has to be explored. That is during the exploration phase, important resource characteristics are evaluated in order to reduce the risk for successive project development phases.

Microdrilling has been developed so far to explore and develop primarily shallow (depth of ca. 1500 m) gas and oil reservoirs. Due to the reduced diameter of the borehole and the smaller equipment used, it has the potential to reduce drilling costs. Current research focuses on increasing the depth of the boreholes, thus enabling the application of microdrilling also for the exploration of deep (3000-5000 m depth) geothermal resources.

Within the exploration programme, microdrilling can be applied in the district exploration phase. In doing so, significant drilling cost reductions may be achieved compared to the drilling of production-sized wells, or major risk reductions for the subsequent prospect evaluation phase, compared to the application of slim-holes. For studying the cost reductions, we apply a cost model for microdrilling that is based on an exponential function that takes the resource depth as the most important parameter driving drilling costs (Tester and Herzog 1990). For production-sized wells applied in district exploration and “wildcat” wells we apply a cost model based on a second-order polynomial functional form (Patton, 2007). The differences in the two cost models are caused by additional costs incurred for production-sized wells in the depth range considered (3000-5000 m), due to larger diameters and additionally required cementing for the upper part of the well.

In order to analyze risk reduction, we have also calculated the expected values of the drilling costs as well as the expected value of the time required to complete exploration activities. These two expected values are affected by a number of parameters, whose values had to be estimated due to a lack of data. In particular, as a first approximation we have assumed that the time needed for completion of the well based on microdrilling technology is reduced by 40% relative to a conventional well of the same depth, and that another month can be saved due to lower measurement needs after completion of the well. Further, we have assumed the risk reduction by means of “wildcat” drilling to be represented by a success rate of 40% (instead of 15%). On the other hand, additional drilling costs due to higher material prices and manufacturing costs were assumed to be at 150% of the costs of conventional drilling. By this parameterization, we have been able to evaluate microdrilling costs, indicating a modest economic advantage in favor of microdrilling.

In order to forecast exploration costs for the widespread use of microdrilling, we applied the experience curve concept. Considering a progress ratio of 90% for manufacturing costs of the drilling string, and a progress ratio of 98% for the drilling progress, the exploration costs decrease significantly with cumulated microdrilling activities. Specifically, after 1000 completed micro-drilled wells a cost advantage was achieved of some 8.2 million US$ (ca. 33.5%) compared to the application of production-sized wells and some 6.7 million US$ (ca. 29%) when drilling a slim-hole. Hence, based on our assumptions (and neglecting cost degression due to learning in conventional drilling), there is a significant economic potential for microdrilling in geothermal exploration.

Finally, we have evaluated the robustness of our results by conducting a sensitivity analysis. We find that the progress ratio of drilling string costs and the risk reduction for the successive exploration phase have been identified to be the most crucial parameters affecting the economic potential of microdrilling. Therefore, more research has to be undertaken to ensure that the assumptions made within our study (which are based on available literature) are indeed reasonable. In particular, a more detailed risk analysis of the overall exploration process is needed to identify key parameters that affect exploration risks and thus the economic potential of new exploration technologies (i.e. not only microdrilling).