You Are Here: Economic and Technical Evaluation of Enhancing the Flexibility of Conventional Power Plants 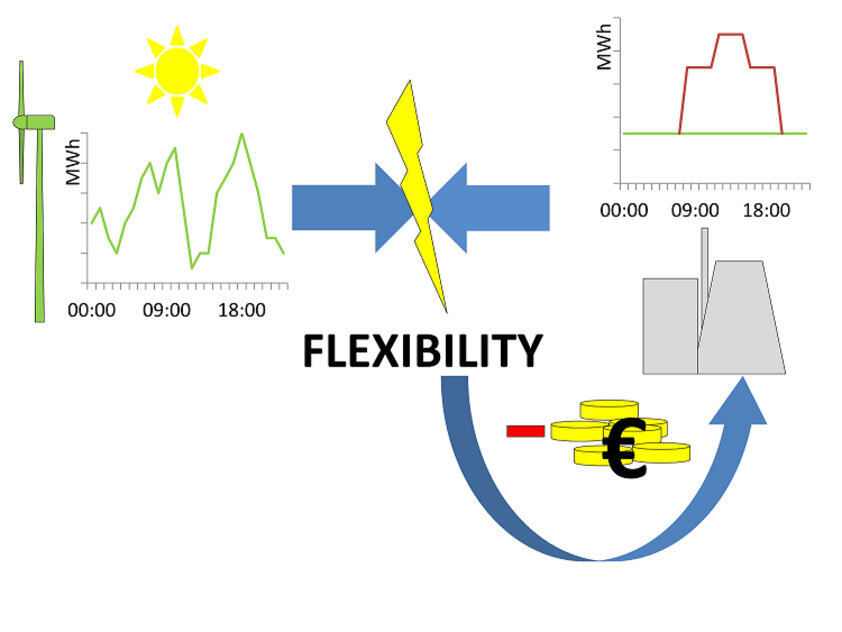 In this project we would like to evaluate the possibilities to enhance the flexibility of conventional power plants. The reason why this is needed is that an increasing number of modern power plants cannot be operated profitably anymore. Markets with high shares of fluctuating renewable energy sources require conventional plants to be able to react to these fluctuations by being flexible themselves. By fulfilling these prerequisites, power plants can enter new markets, increase their operating hours, and contribute to targets to prevent climate change. The latter is achieved by supporting renewable energy on the one hand, and by being able to better exploit modern, highly-efficient power plants on the other hand. Our approach is interdisciplinary in that we consider potential courses of action both technically and economically. Using power electronics alongside with storage systems can support shifting operating points without big losses in efficiency. The monetary value of such changes enhancing power plant flexibility as well as the option to divest the power plant will be examined using real options modeling.

In recent years, some modern power plants have experienced unfavorable conditions which led to difficulties in profitable operation. As a consequence, these highly efficient plants are underutilized or even mothballed despite their state-of-the-art technical properties. Investment decisions are in most cases characterized by being irreversible, implying uncertainty about future rewards, and being flexible in timing (Dixit and Pindyck, 1994, p.3). The success of this investment and, therefore, any future rewards, is uncertain because the price development cannot be perfectly predicted. Furthermore, the timing of an investment is flexible and might be more favorable with the prospect of increasing CO2 and/or electricity prices, sinking costs, or advantageous market conditions at some point in the future.

A relatively new approach for evaluating investment projects with uncertainties has been introduced with the real options approach (Dixit and Pindyck, 1994; Schwartz and Trigeorgis, 2001). This valuation technique is based on option pricing methods used in finance and developed by Black, Scholes, and Merton (Black and Scholes, 1973; Merton, 1973), who based their valuation on partial differential equations. Cox et al. (1979) later developed a binomial lattice model for the valuation of real options.

Under current market conditions, modern, newly-built gas-fired power plants (e.g. Irsching Block 5) cannot be operated profitably. Also many other conventional steam power plants have problems with the fluctuating generation of renewable power plants and cannot adjust their power generation to match the demand as quickly as necessary. Along with reduced start-up times, these power adjustments are required to improve co-generation with volatile sources. As it has been identified that operating a power plant more flexibly can improve its profitability, several ideas for increasing the flexibility of steam power plants will be analyzed within the project.

On the management side, this leads to two possible actions. One can either decide to divest and liquidate the plant or to invest in more flexibility to be able to enter more markets. Both possibilities are to be scrutinized in this project using an interdisciplinary approach. From a financial point of view, both paths constitute options. These can be valued using options theory, but as they are real commodities, we use a real options approach, which is a specification of conventional options theory for capital investment projects. Two real options would be modeled in detail for conventional power plants. They will be constructed in such a way that they can be applied to a number of different (large-scale) power generation technologies, including gas-fired power plants. The first one is the disinvestment option, in which the optimal timing is an essential parameter for the maximal profit. One important influence hereby is the fuel price, which impacts the resale price of the components significantly through the expected future profits to be obtained by the buyer. The second option considers the chance of operating the existing power plant more flexibly using additional components like power electronic converters or storage systems or upgrades of existing components. This can have several effects. By being able to control the power plant more efficiently, markets where ramp-up times are crucial might be entered more easily. Furthermore, when lower levels of power are required, the turbine can be adjusted quickly without substantial loss of the power plant efficiency. As a limiting factor, the minimum feasible load level needs to be determined as well as the efficiency factors at several working points. The investment in upgrading equipment can be regarded as irreversible, justifying the real options approach.