You Are Here: Economics of Concentrating Solar Power Plants 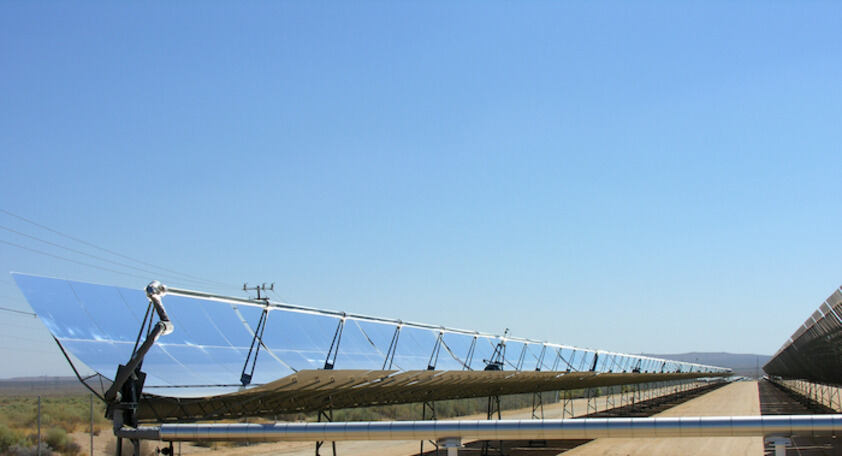 Concentrating Solar Power (CSP) plants are a promising renewable energy technology. Their advantage in comparison to wind turbines or photovoltaics is the easy implementation of an energy storage, achieved by a thermal storage device, and thus the generation of dispatchable energy.

Depending on the collector field size in relation to the turbine (the so-called “solar multiple”) the amount of stored energy can be sufficient to produce electricity for hours after sunset. Still, CSP plants are not fully able to deliver a reliably predictable electricity production due to limitations in forecasting the direct normal irradiance (DNI). Therefore, they cannot operate on day-ahead electricity markets without bearing the risk of high penalty payments for not achieving the predicted generation, or taking counter-measures (e.g. being part of the portfolio of a market agent). These penalties and measures are reducing the potential profit of a CSP plant, reducing its competitiveness. The research project CSP-FoSyS, funded by the European Space Agency (ESA), aims at developing a DNI forecasting tool based on different prediction methods, including the forecasting of direct solar radiation via real-time satellite images. In our research (Kraas, 2010; Kraas et al., 2010), we elaborate the viability of such a system based on a cost-benefit analysis. Specifically, we want to find out whether a DNI forecasting tool can make the CSP technology more profitable and thus more competitive to conventional power generation. The contribution of our study consists in the access to a power plant simulation model of a Spanish CSP plant in conjunction with the Spanish electricity market results, enabling to examine and economically assess in-depth different parameters like prediction method, accuracy, forecasting period or location.

ECONOMIC RE-EVALUATION OF THE DESERTEC PROJECT

In this study (Langstädtler, 2010), we aim at investigating the economics of the CSP project “Desertec“. More specifically, we investigate the costs, risks and uncertainties of an initial pilot project by means of net present value analysis. Based on this first assessment, which we have compared with the Desertec project results (Trieb et al., 2006), development paths are investigated for deriving sequential investment options for project expansion. We find that the most cost-effective size of an initial Desertec project comprises a 2 GW DC cable and 10 power plants with 200 MW of capacity each. For the pilot Desertec plant calculated, we find levelized cost of power generation and transmission that are 10 ct/kWh higher than those found in the Desertec Foundation study. This is attributable in part due to the smaller project size, but also due to less optimistic cost estimates on our side. Unless marked cost reductions for CSP power plants can be achieved in the coming years, we conclude that the estimated budget of € 395 billion for the realization of the entire Desertec project will likely be overrun. Finally, we have conducted a risk analysis by means of a Monte Carlo simulation. It confirms that the electricity generation costs estimated by Trieb et al., 2006 may indeed be rather optimistic, and that even minor delays in the construction times can have a severe negative impact on the project’s profitability. With respect to these last-mentioned findings, investors are advised to take their spending decisions with caution.

IMPACT OF ALTERNATIVE STORAGE TECHNOLOGIES ON THE ECONOMICS OF CSP PLANTS

Deserts receive more energy from the sun in six hours than humanity currently consumes per year. It seems attractive that the vision of commercially utilizing the potential of the sun for the supply of electrical energy to all people in the world becomes a reality. Utilizing renewable energy sources for electric power at large scale is a fascinating option, in particular regarding CO2 mitigation and decreasing dependence on fossil energy resources. However, there are challenges that need to be tackled in order to make these power plants cost-effective and to accommodate to specific market needs. When focusing on CSP generation it becomes obvious that there is a need for power generation during times without solar radiation. Another aspect is that the best market prices for the electricity produced can only be achieved if power plants are able to deliver electricity also during peak-load times. In order to deal with the above-mentioned challenges, two technologies are currently used to enhance the electric output and achieve base-load capacity: (1) hybrid technology, using fossil fuels for co-firing, and (2) energy storage facilities installed onsite. In this respect it is interesting to know whether and to what extent currently employed energy storage technologies can really enhance the cost effectiveness and match the needs of electricity markets. In this study (Minis, 2010), we analyze and discuss the economic effects of alternative energy storage facilities for CSP plants. We compare different thermal energy storage technologies and evaluate their cost-effectiveness compared to hybrid co-firing technologies. By considering the volatile fossil fuel prices and the goal to generate solar-only power, our study also analyzes the sensitivity of the cost-effectiveness of power plants to fossil fuel price changes, and to shed some light on the idea of 24-hour solar-only power generation.