You Are Here: Energy Consumption Patterns of an Aging Population 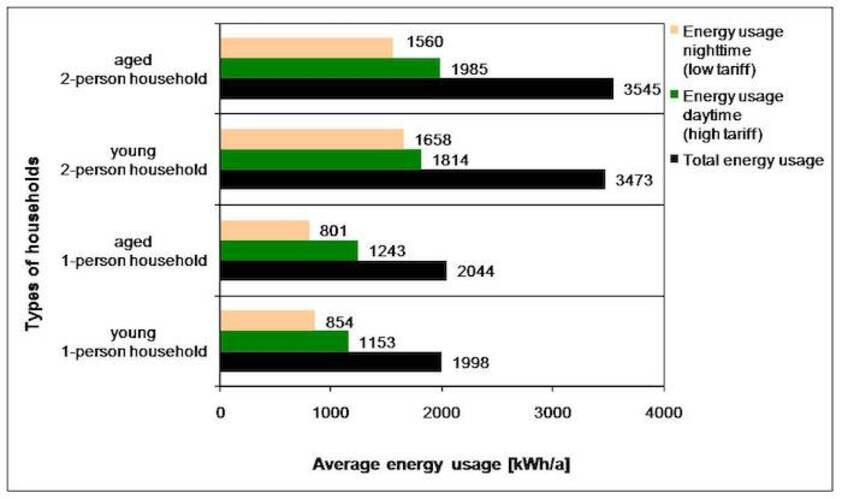 Under this research heading, we report on two studies undertaken in 2009 on energy consumption patterns of aging private households. A first study has focused on residential energy demand in Germany, with a particular emphasis on structural change caused by an increasing share of older people. In a second study, we have empirically investigated the residential household sector in Switzerland, again with a special focus on the differences in appliance stocks and energy consumption patterns between younger and older households.

In 2006, primary energy consumption in Germany was 14,588 Petajoule (1 PJ = 1015 J). About 30% of this amount can be attributed to residential energy demand. The composition is well analyzed and several models have been developed for estimating future residential energy demand. However, few attempts have been made so far to analyze the present and future energy consumption of the elderly people. As a consequence of the structural change in Germany, the share of people older than 60 years will increase from 24.9% in 2005 to 37% in 2030. Elderly, as a result of a less active lifestyle, have a lower energy demand from household appliances due to a lower equipment stock and also a lower energy demand for hot water preparation. However, elderly have a higher energy demand for space heating, because they frequently occupy older homes, that lack sufficient thermal insulation, require warmer ambient temperatures to feel comfortable, and are more often at home. As 76% of residential energy demand is required for space heating, the greatest energy savings can be obtained with an energy efficient building stock. The challenging targets set by the German government for reducing total energy consumption by 20% until 2020 can only be accomplished with great efforts in the building stock. Incentives have to be provided especially for the elderly population, who often refuses investments in energy efficiency that require relatively long amortization periods.

The residential household sector with a share of 253,880 TJ (29.2 %) in total energy consumption is the second-most energy intensive sector in Switzerland, after the transport sector. The existing literature on electricity demand of the residential sector concentrates primarily on the influence of energy prices and household income. By contrast, other household characteristics, describing demographic, economic and equipment features of households, are often neglected due to a lack of data.

In the light of significant societal developments, such as over-aging of the population and a trend towards single and two-person households, we investigate the influence of age on electricity consumption, appliance stock and consumer behavior, using a rich data set for Switzerland and econometric estimation techniques. The results indicate that both younger and older persons consume about the same amount of electricity by using electric devices. However, electricity consumption in both age groups is composed differently. Whereas older people use their existing lower stock of appliances intensively, younger people tend to have a large number and variety of appliances but typically use them less intensively (see Figures 1 and 2).

Future political information campaigns should account for this fact and measures to raise the rational energy use adjust to both energy consumption groups. One measure to limit the growing electricity consumption of home office and entertainment equipment in absolute terms is the introduction of binding energy efficiency standards, as they were recently introduced European-wide by an EC Regulation for stand-by consumption of certain appliances (CEC, 2008).