You Are Here: Foreign Direct Investment in Carbon Footprint Reduction Projects: The Case of the Russian Energy Market Post-2012 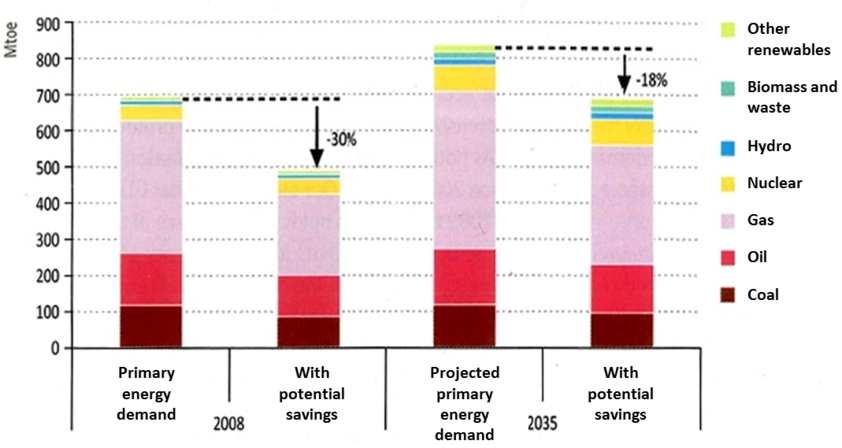 Despite of the average decrease of Russia’s primary energy intensity by 3.2% and its CO2 intensity by 4% annually between 2000 and 2012 (Enerdata, 2012b, 2012c), the Russian Federation remains the fourth-largest energy consumer after China, United States (US) and India (Enerdata, 2012d) and the fifth-largest CO2 emitter in the world (Enerdata, 2012a). However, such changes in energy- and CO2 intensity are attributed not to the improvements in the efficiency of energy use, but rather to the sharp economic downturn, caused by the transition from the centrally planned economy of the Soviet Union to a market economy during the 1990s, followed by the financial crises of 1998 and 2008-2009.

Poorly maintained technical equipment and low energy efficiency in the country’s industry cause a huge wastage of energy resources that increasingly affect the development of the Russian economy. Among other factors a lack of investment in the energy industry impedes a timely improvement. In addition, a rapidly growing domestic demand for energy could lead to energy scarcity for both domestic use and export, as well as an increase in CO2 emissions. Inefficient energy use and the huge volume of carbon emissions alarm international authorities and, in turn, motivate foreign investors to be cautious with business opportunities and calculate risks related to energy efficiency improvement and carbon footprint reduction projects in Russia.

The aim of this research project is to investigate the current development and potential for two market-based mechanisms, i.e. Joint Implementation (JI) and Green Investment Schemes (GIS), as possible forms of channeling foreign direct investments (FDI) into international projects in the Russian energy market post-2012. The timely implementation of these mechanisms for modernizing the Russian energy industry has been expected to bring numerous economic and environmental benefits by providing a balanced win-win situation for both foreign investors and Russia itself.

However, empirical evidence shows insufficient progress regarding the implementation of JI and GIS and hence the accomplishment of long-term FDI is strongly impeded by many country-specific transaction barriers and uncertainties about future climate change policies. In this context, we argue that Energy Service Companies (ESCOs) through Energy Performance Contracting (EPC) can overcome the existing barriers and successfully exploit the opportunities arising from the implementation of the energy efficiency and carbon mitigation investments in Russia independently from the success or failure of the Kyoto Protocol. The Russian ESCO industry, though, is still in its early stage of development. To date, there is no reliable information available about the results of any energy performance-based projects. In addition, no comprehensive academic or non-academic research on the Russian ESCO market has been done before.

We aim to fill part of this research gap. In doing so, we have set a series of goals.The first objective is to understand current and future developments in Russian energy efficiency and climate policy. The second objective is to analyse the development of JI and GIS and the relevant transaction barriers, as well as to evaluate an ESCO business model that facilitates FDI and technology transfer in energy efficiency and carbon mitigation projects post-2012. Finally, we introduce the first systematic empirical investigation of the Russian ESCO industry by looking at experiences of the international ESCO markets and assessing the risks that ESCOs bear in Russia.

Garbuzova, M., & Madlener, R. (2012). Towards an efficient and low carbon economy post-2012: Opportunities and barriers for foreign companies in the Russian energy market. Mitigation and Adaptation Strategies for Global Change, 17(4), 387-413.