You Are Here: Merit Order Effects from Large-Scale CCS Deployment in Europe 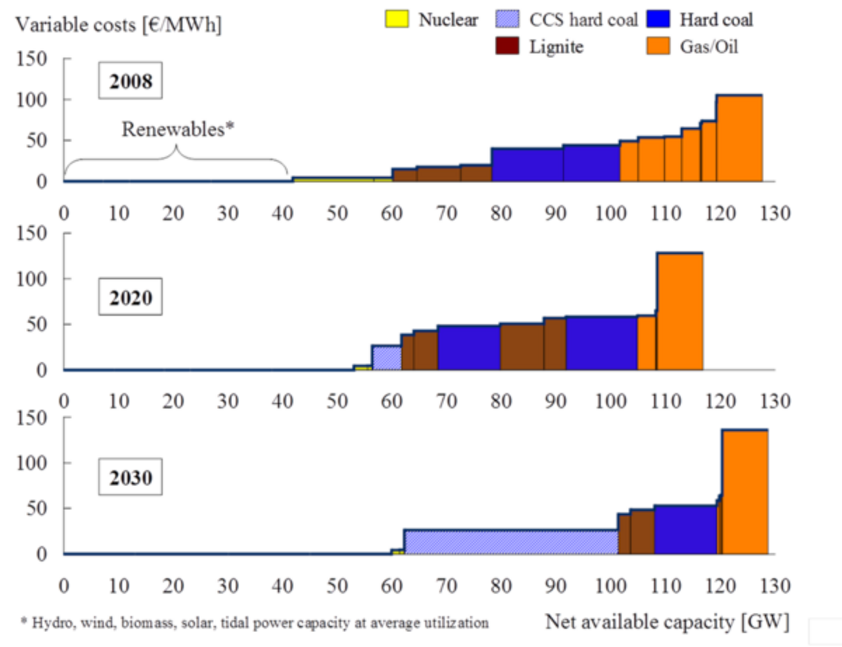 The research reported here is part of a larger research project on the economics of CCS that forms part of the doctoral dissertation of Richard Lohwasser, and in the course of which several FCN Working Papers and one publication in the journal Energy Economics have been realized. Currently, two of the working papers are being revised for resubmission to journals.

Global warming and the long-term stabilization of the CO2 concentration in the atmosphere are prime challenges for the energy sector. As renewable energy sources, such as solar- or wind-based technologies, cannot serve as a prime backbone of national power generation portfolios, and since low-carbon nuclear power generation faces public acceptance problems in the aftermath of Fukushima, alternatives are needed. Carbon Capture and Storage (CCS) is seen as a technology that enables to continue fossil-fuelled power generation, while at the same time contributing to CO2 mitigation.

Evolving Market Dynamics: Unlike most of today’s technology, the economics of CCS-based power plants have the special characteristic of low variable costs and high fixed costs, while still being fairly flexible compared to nuclear plants. Together with the intermittent production profile of the large quantities of wind technology coming online as part of the EU’s 20% target on renewables, we expect the market dynamics of supply and demand matching and price setting to change significantly over the next decades.

However, these characteristics and dynamics are difficult to capture in typical top-down equilibrium energy models. This raises a research need, addressed in this project by deploying a new model (HECTOR), which simulates markets of 19 European countries simultaneously with over 400 groups of power plants at an hourly resolution until 2040.

Effects of Large-Scale CCS Deployment: At high CO2 prices of above 40 €/t (currently they are at only approx. 10 €/t), we find that conventional fossil fuel-fired power plants are replaced both by renewable energy technologies and over 200 GW of CCS capacity by 2040 across Europe, almost fully utilizing available CO2 storage capacities in some of the regions studied. For the largest model region investigated, covering Germany, Austria and Switzerland, we expect 60 GW of CCS coming online until 2040, also due to nuclear plants that have been or will be phased-out in the aftermath of Fukushima.

This has noticeable implications for utilities with a large share of traditional non-CCS coal and gas-fired power plants, especially as their options to improve the position in the merit order curve are limited. Only low fixed cost and low depreciation peaker capacity remains online, serving high demand and low renewable production periods. These merit order effects found over the next decades, driven by CCS and renewables, will further increase the already existing need for electricity sources that efficiently provide affordable, non-intermittent electricity at low utilization factors.