You Are Here: Assessment of the Technological Development and Economic Potential of Photobioreactors

Assessment of the Technological Development and Economic Potential of Photobioreactors 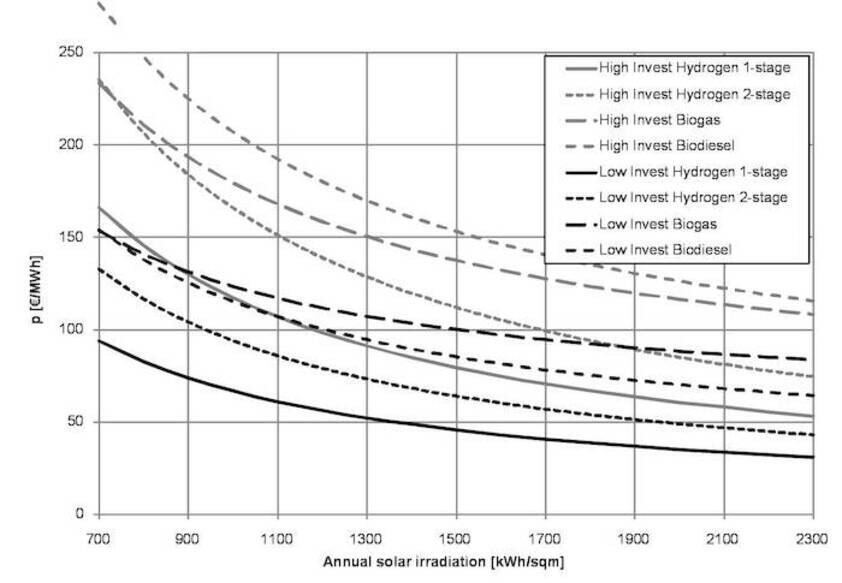 Investment scenarios as a function of annual solar irradiation (Source: Holtermann and Madlener, 2009)

In this self-funded research project, we investigate the technological development and economic potential of the photobioreactor (PBR) technology for energy purposes, i.e. for the production of hydrogen or biofuels. The generalized approach adopted is to consider the technology, its expected costs and revenues, and related risks, from an investor perspective.

To this end we have developed an investment model that is used to calculate the economic feasibility of PBRs for different scenarios, including a best-case scenario, with plenty of sunlight and water, inexpensive nutrients, high prices for hydrogen and biomass, and low other costs. The best-case scenario is compared to a scenario with less favorable boundary conditions.

The idea behind PBRs is to hold easy-to-handle phototrophic microorganisms, such as algae or cyanobacteria, in a translucent reactor. Phototrophic organisms can supply themselves with energy from sunlight by converting it into chemical energy. In recent years, PBRs have been widely discussed and praised as an innovative energy technology that in the future could also be utilized for commercial energy supply purposes.

In contrast to conventional biomass production in the field, a PBR is essentially a closed system with well-defined interfaces towards the environment. This bears potentials to reduce the ecological impact on the environment and to increase the efficiency of energy conversion. Also, under the influence of solar irradiation, some algae are even able to produce hydrogen from water. Moreover, phototrophic organisms, during photosynthetic activity, consume CO2, thus enabling the establishment of a local carbon cycle by interconnecting coal-fired power plants with nearby PBR systems. The ability to absorb CO2 and to produce biomass and hydrogen at the same time is unique and makes PBR an interesting new technology to be investigated further as a future option for power generation systems with reduced CO2 emissions, despite its currently low conversion efficiency of at best only around 6%.

In our exploratory investigation we find that PBR efficiencies will likely be less than 10%, with typical values between 1.8-5.6%. We also find that hydrogen production costs would be lower than those for biodiesel or biogas from solid biomass produced in PBRs. Compared to biofuels from traditional agriculture there is a great advantage for the PBR technology if land is scarce, because land is used more efficiently. Since PBRs can be designed as a closed system they can in principal also be applied in very dry regions. In the long term this might enable this promising concept to penetrate the energy supply market.