You Are Here: Economic Impacts of Sustainable Energy Consumption ("e-co") 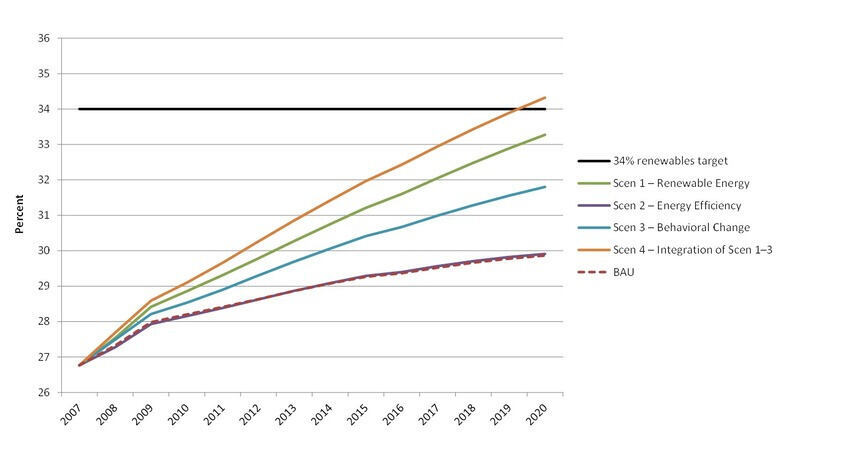 The research project “e-co” analyzed the effects of sustainable energy consumption on the economy, the environment and society that arise by following the goals stipulated in the Austrian energy and climate policies for 2020. Three different scenarios were simulated and evaluated using an integrated environment-energy-economy model. The scenarios focused on (1) renewables, (2) energy efficiency increases and (3) reductions in energy consumption of private households by voluntary changes in consumer behavior.

The project’s methodology built on the development, modeling and evaluation of the scenarios mentioned above. The scenarios were simulated using an integrated environment-energy-economy model for Austria (e3.at), which was updated and adapted within the project (especially with regard to the stock of dwellings of different age and size categories) to allow for a quantitative evaluation of the scenarios. After the adaptations, the macroeconomic multisectoral simulation model was an appropriate framework for the analysis, allowing explicit and consistent consideration of the complex and diverse interactions between various sectors of the economy. The effects of the scenarios on economic growth, the environment (e.g. CO2 emissions), the balance of trade and the labor market could thus be depicted in great detail.

During the scenario development, modeling and evaluation, a selection of stakeholders (lobbyists, politicians and experts) in the fields of energy policy and energy supply were actively involved in the scientific work, in order to enrich the scientists’ and experts’ research and decision process by their experiences, knowledge and preferences. The project thus contributed to the alliance between science and practice by supporting the dialogue between stakeholders and scientists and by increasing the transparency of the modeling process.

The results of the project clearly show that increases in energy efficiency and in the renewables share are important elements of an “energy turnaround”. However, they do not suffice to reach Austrian and EU energy and climate policy goals. Renewable energy and efficiency increases can only fulfill the role assigned to them in achieving a sustainable energy system if they are complemented by behavioral changes that stop the increase in energy demand.

The effect commonly known as “rebound” especially impinges upon efficiency increases. Thus, energy consumption – for example by domestic appliances or by individual traffic – has been continuously rising for years despite increased efficiencies. Additionally, an indirect rebound effect is caused by measures stimulating economic development in energy-intensive sectors (increase in energy consumption due to economic growth). Being able to display indirect rebound effects is a significant advantage of the integrated modeling enabled with e3.at, since economic conjunctions are consistently accounted for in the model.

Forceful implementation of the measures proposed in the scenarios would lead to improvements not only regarding energy and climate, but also for the economy. Thus, economic output and employment have performed better in all scenarios compared to the business-as-usual scenario. Sustainable behavior might cause temporary restrictions, but not necessarily and not permanently impairs economic potential.