You Are Here: Modeling the Spatial Diffusion of Agricultural Biogas Plants 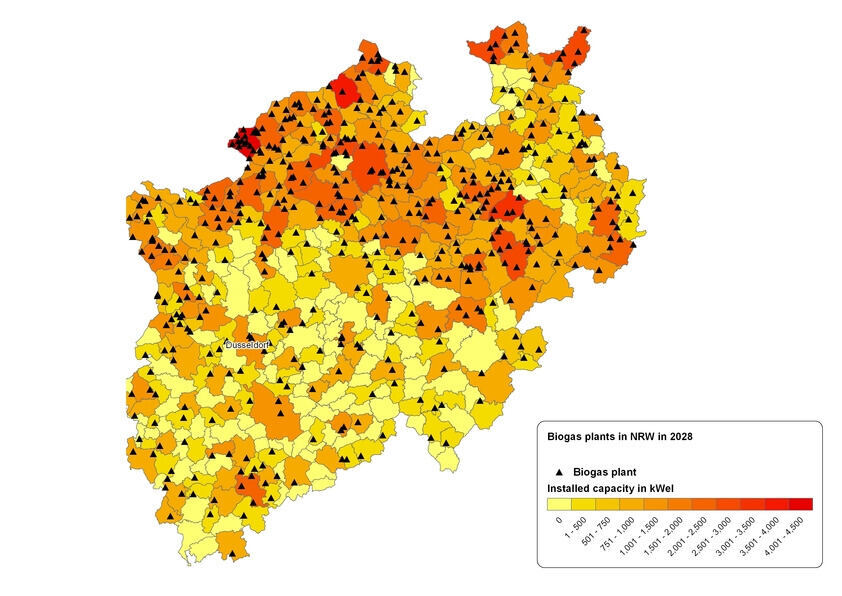 Distribution of total biogas plants and installed electric capacity per community in NRW in 2028 (Source: FCN)

Energy derived from biomass (in particular biofuels and biogas) has become an important subject of political debate and governmental support. In comparison to other renewable energy sources such as wind and solar, biomass can be easily stored and does not rely on fluctuating weather-related factors that affect power generation. However, biomass is characterized by low energy content. In order to achieve efficient energy conversion, biomass must be processed in proximity to the feedstock location.

In this research project we studied the economic viability and spatial diffusion of biogas technology in the agricultural sector by means of a agent-based simulation model (ABM). The aim of the simulation process was to estimate and display the spatial dissemination of agricultural biogas technology in selected regions in Germany over the period from 2008 to 2028 by explicitly accounting for resource potentials, subsidy schemes and alternative technologies. The ABM was fed with Geographical Information System (GIS) data at the community level. The data comprised of geographical, agricultural and economic information. The spatial diffusion model accounted for three alternative plant sizes (100 kWel, 500 kWel, 1 MWel) that generated combined heat and power (CHP). The possibility of investing in three competing heat use technologies (mobile storage, local district heating and ORC process) was also modeled. This allowed us to assess whether a more efficient utilization of waste heat improves the economic viability of different biogas plant sizes and leads to faster market penetration.

It is important to keep in mind that the adoption and diffusion rates of biogas technology vary across Germany’s federal states. This leads to the hypothesis that disparities in spatial diffusion may stem from differences in local framework conditions. The latter may relate to the prevailing agricultural structure (e.g. stock farming versus crop production), the availability of substrates, the degree of nutrient saturation of farmland, the existence of heat sinks and differences in the acceptance and awareness of potential adopters with regard to the technology (i.e. existence of local knowledge networks). In addition, local differences in cost and revenue was well as in policies such as subsidies or information campaigns promoting agricultural biogas plants could have an impact on the spatial distribution of this technology.

For the purposes of this project we focused our analysis on the two German federal states of North Rhine-Westphalia (NRW) and Bavaria. Two reasons led us to this choice. First, data availability in sufficient geographical detail is scarce. Secondly, NRW and Bavaria can be considered as representative benchmarks for Germany with respect to the number of plants installed, average generating power and underlying socio-economic conditions.

The two key components of our model are the ABM interface and the GIS data. An ABM usually refers to a group of interlinked players that make (partially) autonomous decisions under limited information and decentralization. ABMs are useful in the study of collective behavior of independent agents that interact with each other and their environment. In general terms, ABMs are software programs that assign data and behavioral algorithms to representative actors. The organization of the ABM defines the role, behavioral expectations and authority relations among various agents and sets the framework for their interaction.

According to our results, thanks to current technologies and governmental support, new biogas facilities can increasingly take advantage of agricultural by-products and wastes scattered across the territory. We estimate an additional capacity potential of 370 MWel in North Rhine-Westphalia and Bavaria alone (see the attached figure for potential installed electric capacity in NRW in 2028). The inclusion of an efficient use of waste heat produced by the CHP plants further increases the potential energy contribution.

Electricity generation is characterized by relatively small conversion units located in the proximity of substrate-rich areas. Accordingly, we expect biogas plants to be built in areas with abundant agricultural resources and concentrate in the northern and north-western regions of North Rhine-Westphalia and in the south-eastern and mid-western areas of Bavaria.

A key policy recommendation based on this study is the maintenance of the current (or similar) feed-in tariffs in order to guarantee a full exploitation of biomass resources for electricity generation with biogas-run CHP units. A 25% decrease of the current support scheme, for example, would remove a key incentive to build biogas plants. As the availability of substrate decreases and its price increases, investors will not finance biomass-based CHP facilities without adequate compensation and available biomass resources will remain unexploited.

The inclusion of different heat distribution technologies also plays an important role in the attractiveness of the investment decision in a biogas plant. An efficient heat use is also coupled with increased feed-in payments, though it remains contingent on the availability of sufficient heat sinks in the proximity of the biogas facility.